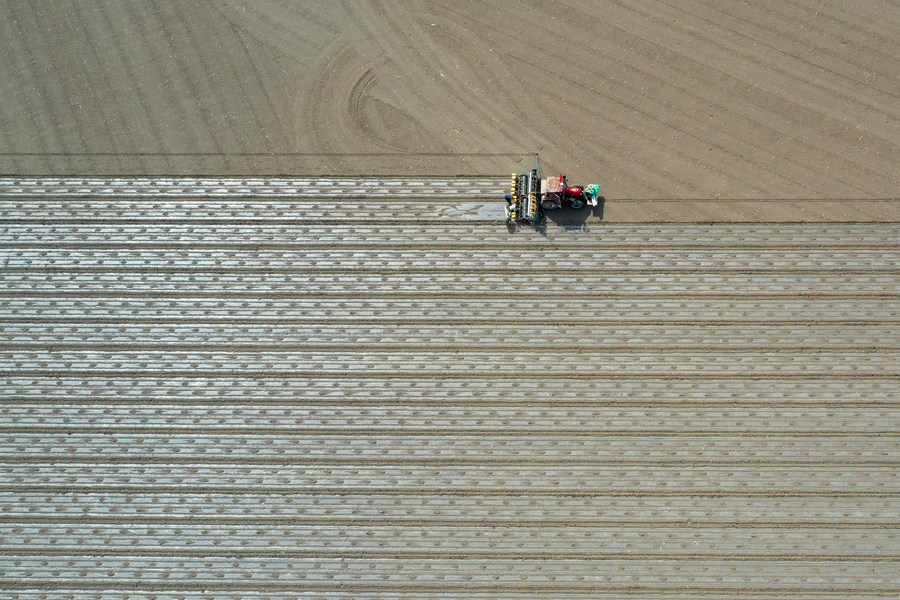 Aerial photo taken on April 19, 2022 shows a seeding machine guided by the BeiDou Navigation Satellite System working in a cotton field in a farm of a division of Xinjiang Production and Construction Corps in northwest China's Xinjiang Uygur Autonomous Region. (Xinhua/Ding Lei)

BEIJING, June 22 (Xinhua) -- A Chinese official on Tuesday said that the U.S. ban on all imports from China's Xinjiang Uygur Autonomous Region is a typical example of economic coercion.

The move will seriously damage the interests of Chinese and U.S. consumers and enterprises, and will do no good for the stabilization of global industrial and supply chains, global inflation easing, or the promotion of global economic recovery, a Ministry of Commerce spokesperson said in a statement.

U.S. Customs and Border Protection on Tuesday imposed a ban on imports of all products related to Xinjiang, based on the so-called "Uyghur Forced Labor Prevention Act."

In firm opposition to the ban, the spokesperson said the United States is practicing unilateralism, protectionism and bullying in the name of "human rights," which seriously undermines market principles and violates the rules of the World Trade Organization.

Stressing that forced labor is explicitly prohibited under Chinese law, the spokesperson said that all ethnic groups in Xinjiang enjoy complete freedom and equal opportunities in employment, and their rights and interests are effectively guaranteed.

From 2014 to 2021, the disposable income of urban residents in the region increased from 23,000 yuan (3,440 U.S. dollars) to 37,600 yuan, and that of rural residents rose from approximately 8,700 yuan to 15,600 yuan. By the end of 2020, over 3.06 million people in Xinjiang had been lifted out of poverty. And for cotton sowing, one of Xinjiang's main industries, the comprehensive mechanization rate in most areas of the region exceeds 98 percent.

The promotion of so-called forced labor is fundamentally untrue, and the U.S. ban will deprive people in Xinjiang of their rights to work and develop, and it will result in forced unemployment and even a return to poverty, the spokesperson said.

The real intention of the U.S. is to discredit China's image, interfere in its internal affairs, curb its development, and undermine Xinjiang's prosperity and stability, the spokesperson said.

The spokesperson said the U.S. should immediately cease its political manipulation and withdraw all sanctions and suppression measures related to Xinjiang.

China will take any necessary action to safeguard its national sovereignty, security and development interests, as well as the legal rights and interests of all ethnic groups in Xinjiang, the spokesperson said.

Given the high inflation and low growth in the world economy, the U.S. should do more to contribute to the stability of industrial and supply chains and economic recovery, and create conditions under which economic and trade cooperation can be deepened, the spokesperson said.