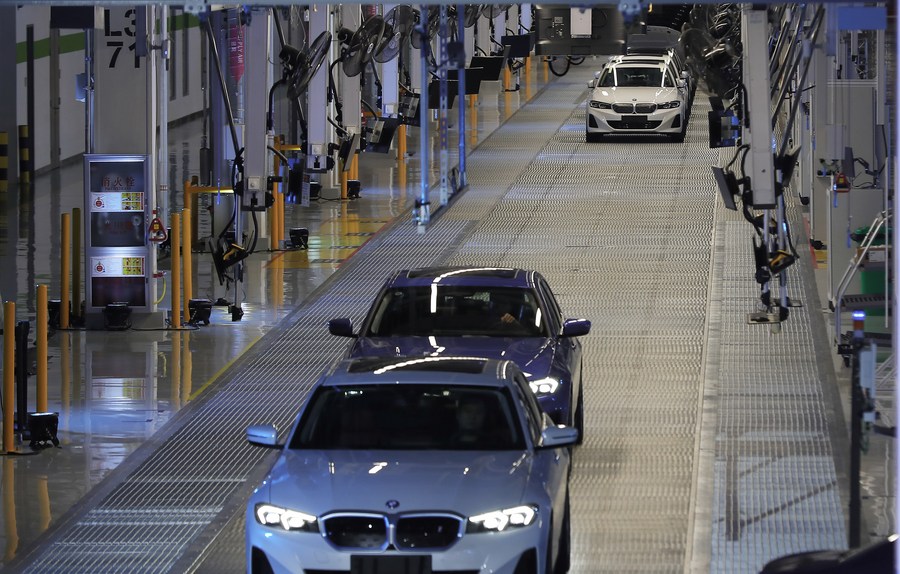 TIANJIN, June 23 (Xinhua) -- Commercial compressors filed out from an automated production line, with a few workers operating the intelligent system and checking the quality at the Danfoss smart manufacturing factory in north China's Tianjin Municipality.

Danfoss, a leading Danish heating technology company, made its first investment in China in 1996 by establishing the Danfoss (Tianjin) Co., Ltd. After over two decades, the subsidiary has developed into a modern factory integrating research and development (R&D), new product testing and intelligent manufacturing.

Driven by China's goals of peaking carbon dioxide emissions by 2030 and achieving carbon neutrality by 2060, Danfoss has made energy conservation and emission reduction a key development area in China and continued to increase investment.

In 2021, Danfoss announced it would invest 140 million yuan to build a global refrigeration R&D and testing center in Tianjin. "It is our largest R&D center currently, and we expect to put it into use by the end of this year to put the newly-developed products on the market," Dai said.

In line with China's development goals, enjoying multiple favorable policies and a promising business environment, Dai said these are the main reasons for the company to take root, develop and continue to increase investment in China.

In addition to Danfoss, many foreign enterprises have also set their sights on China's future development and expanded their businesses in the country.

Foreign giants like Fast Retailing, Siemens Healthineers, and L'Oreal have been opening new stores, increasing investment, and launching new projects, demonstrating their confidence in China, as well as the determination to expand their presence.

In the eastern city of Suzhou, Mando from the Republic of Korea plans to invest over one billion yuan in new projects in 2022. In Zhejiang Province, Nidec Elesys (Zhejiang) plans to further invest 150 million yuan this year to expand the production capacity of inverters for new energy vehicles.

According to the 2022 China Business Climate Survey Report released by the American Chamber of Commerce in China (AmCham China), two-thirds of the surveyed companies plan to increase their investment in China this year.

With consumption upgrading accelerating in recent years, the vast market of China, with over 400 million middle-incomers, is attractive enough for global investment, said Cong Yi, a professor at Tianjin University of Finance and Economics.

In recent years, China has continued shortening the negative list for foreign investment and put into force laws and regulations including the Foreign Investment Law to protect the legitimate rights and interests of foreign investors.

Even during the COVID-19 pandemic, China has made great efforts to stabilize the industrial and supply chains and ensure the steady progress of major projects, which further bolstered foreign companies' investment confidence in China.

During the period, investment from the Republic of Korea, the United States, and Germany climbed by 52.8 percent, 27.1 percent, and 21.4 percent, respectively.

Shu Jueting, a MOC spokesperson, said in May that multinational companies have actively expanded investment in China, which shows foreign investors' confidence in the prospects of the Chinese economy and reflects the attraction of China's huge market, complete industrial system and infrastructure, as well as abundant human resources.

Shu also noted that China will continue to deepen its opening-up and optimize services for foreign investors to create more opportunities for foreign-funded enterprises.